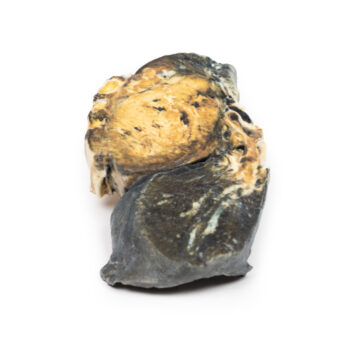 Clinical History
This 47 year old woman was admitted with terminal carcinomatosis. On examination a hard liver and a right pelvic mass were palpable. She had been ill with constitutional symptoms for months and she finally sought medical attention. She was admitted for palliative care and died shortly afterwards.

Pathology
The left lung has been sliced longitudinally to display the cut surface. Multiple pale tumour nodules of varying size are scattered throughout the lung substance. Near the hilum several nodules are confluent. The hilar lymph nodes contain pale tumour tissue. Small tumour nodules can be seen beneath the thickened pleura. Histologically these were metastatic deposits of adenocarcinoma. At post-mortem there was an adeno-carcinoma of ovary, with metastases in lungs, heart, liver and pericardium.

Further Information
Pulmonary metastases are more common than primary lung cancer. Malignant disease arising anywhere in the body may spread to the lungs. Sarcomas usually metastasize by the bloodstream, and carcinomas spread either via the bloodstream or the lymphatic system or both.

This website uses cookies to improve your experience while you navigate through the website. Out of these, the cookies that are categorized as necessary are stored on your browser as they are essential for the working of basic functionalities of the website. We also use third-party cookies that help us analyze and understand how you use this website. These cookies will be stored in your browser only with your consent. You also have the option to opt-out of these cookies. But opting out of some of these cookies may affect your browsing experience.
Necessary Uvijek omogućeno
Necessary cookies are absolutely essential for the website to function properly. This category only includes cookies that ensures basic functionalities and security features of the website. These cookies do not store any personal information.
Non-necessary
Any cookies that may not be particularly necessary for the website to function and is used specifically to collect user personal data via analytics, ads, other embedded contents are termed as non-necessary cookies. It is mandatory to procure user consent prior to running these cookies on your website.
Spremi i prihvati
Product has been added to your cart
Close